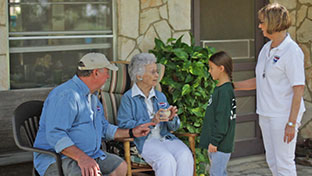 KICKAPOO KAMP, founded in 1925 by Mr. and Mrs. Charles L. Ford, has been in continuous operation since that time by second and third generations of the Ford Family. The Fords were both Dallas teachers until retirement and were involved with children all their lives. Today Kickapoo is one of the oldest private camps for girls in the Southwest.

The camp is currently owned by the Ford’s daughter, Bimmie Findlay, and her daughter, Laura Hodges. Bimmie was only two years old for Kickapoo’s first summer in 1925. She has been closely associated with the operation and management of Kickapoo all her life, and through all the stages - from camper, counselor, and program director, to owner. 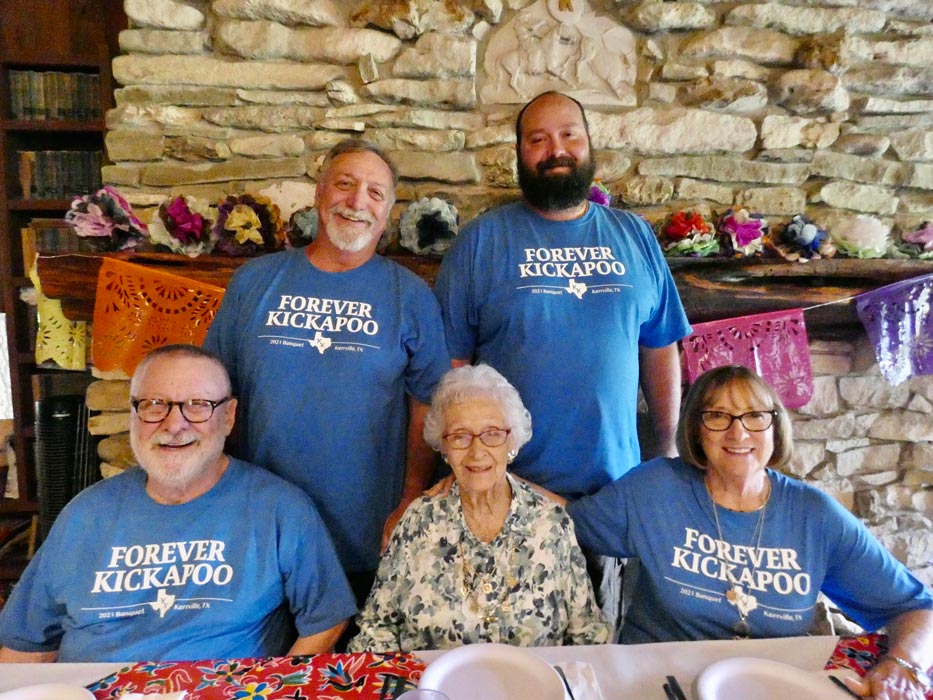 Laura Findlay Hodges, the third-generation director of Kickapoo Kamp, is proud to carry on the vision and tradition in camping that was nurtured by her parents and grandparents. She is truly dedicated to creating a quality camp experience in which girls can make lifetime friendships, learn new skills, and develop an appreciation of nature. Kickapoo has been part of Laura’s life since the beginning, so she knows kamp inside and out. After enjoying many summers as a kamper, Laura progressed from kounselor, to program director, to director. During the off-season, Laura lives in San Antonio where, in addition to her commitment to Kickapoo Kamp, she manages to find time to work as a licensed CPA. Laura graduated from LSU with a degree in Education and completed her Master of Taxation and in 1999. Laura is a past president of our state camping association, Camping Association for Mutual Progress (C.A.M.P.) and has served as its treasurer since 1984. Laura is very proud of her three sons, Brian, Christopher, and Gregory who all live and work in the Dallas area with their families. Laura is thrilled that Angie and Rachel have joined the family business and are contributing to the success of Kickapoo. Laura thoroughly enjoys being the grandmother to three fifth-generation kampers, Sydney, Kylie, and Fallon, and two future workboys, Kayden and Keaton. 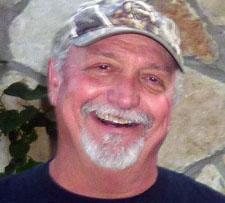 Larry Findlay, Bimmie’s son, is Kickapoo’s facility director. Larry has grown up in the camp industry, attending Camp La Junta and working at Kickapoo as a “work boy” in his younger days. His position requires a great deal of flexibility and talent. Not only does he keep the grounds looking beautiful by planting and maintaining all of the grass and plants, but he also makes repairs around camp and takes care of any cabin maintenance. Larry is indispensable in setting the stage for night programs during each term and is well known for his active participation in BINGO and the awarding of the blanket. Additionally, Larry trains and supervises the “work boys,” oversees the care of the horses, and supervises the Kickapoo Retreat Center during the off-season. Larry attended Del Mar College and worked with his father, Gordon, in the restaurant business for 25 years before devoting his talents to Kickapoo full-time. Larry lives on camp property and is proud of his two sons, T.C. and Ford. 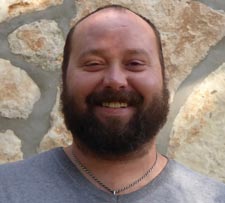 Lawrence Ford Findlay, Larry’s son, is Kickapoo’s assistant facility director. Ford has grown up in the camp industry, attending Rio Vista and working at Kickapoo as a “work boy”. Ford’s role at Kickapoo utilizes his knowledge and experience. He repairs and maintains all kamp buildings, equipment and vehicles. In addition, he helps with the upkeep of the grounds, Ford also helps train and supervise the “work boys,” and assists with the feeding and caring of the horses. After graduating from Tivy High School in 2002, Ford earned his certification as a mechanic From Arizona Automotive Institute. He worked at Midway Garage in Kerrville for 10 years before taking the position at Kickapoo Kamp. Ford lives on camp property and enjoys hunting and camping. 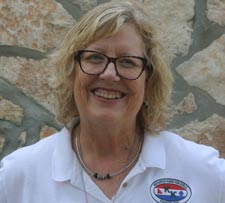 Carolyn Shean aka “Myrtle” is Kickapoo’s Assistant Director for Terms One and Three and is also involved in staff and kamper recruitment during the off-season. “Myrtle” actually got her nickname at age 9, while she was a Kickapoo Kamper. As a kamper, she always looked forward to returning to Kickapoo each summer and still treasures the years she spent as a kamper and a counselor, where she adopted Kickapoo as her second family. “Myrtle” returned to kamp in 1995 when her daughter, K.C. became a kamper. Myrtle enjoys training the counseling staff ,striving to build an environment where girls can feel at home at Kickapoo and develop knowledge of self as well as an appreciation of the great outdoors. She is committed to helping to build a positive kamp experience for each and every kamper. “Myrtle” graduated from the University of Texas with a degree in elementary education, and retired from teaching after 34 years in Round Rock Independent School District and now works part time as a Reading Specialist. Myrtle” lives in Georgetown, TX with her wonderful husband, Bill. Myrtle loves being a grammy to future kampers and workboys as much as she loves kamp! 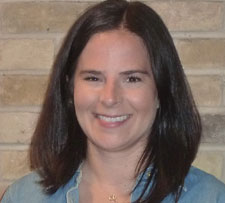 Aimee Sparrow Bailey is Kickapoo’s Assistant Director for Term Two. She has spent more than half of her life at Kickapoo. She spent 5 years as a camper and when she was old enough, she began to work at kamp as a kounselor. She spent 4 years as the equestrian director at kamp. After taking one summer off, she returned to Kickapoo as program director. Aimee has worked in her current position since 2000 and enjoys watching kampers develop their skills each summer at Kickapoo. Her outgoing personality and fun-loving spirit make her an asset to the Kickapoo team. Aimee graduated from Southwest Texas State University with a degree in interdisciplinary studies and from The University of Texas at San Antonio with a Master’s of Counseling. Aimee lives in Selma, Texas where she is a Professional School Counselor with the Judson Independent School District. She is also involved in a leadership role of the Texas Counseling Association. She loves spending time with her husband, Kevin, her step-children, her Westie fur-kids, reading, shopping, traveling to Disney World, and listening to live music. 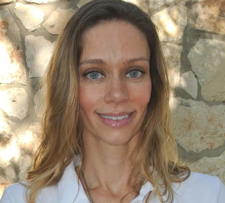 Angie Hodges, part of the fourth generation of the Findlay-Hodges family at Kickapoo Kamp, is our Marketing Director. While Angie didn’t grow up at Kickapoo, she jumped right in and is committed to making kamp a place where girls can flourish. She enjoys her role in helping parents keep up with the daily events at kamp through photos, newsletters, and social media. Angie also serves as the staff coordinator for our counselors, and running our mother-daughter weekends. Before taking on her full-time role at Kickapoo, Angie spent several years attending mother-daughter weekends with her girls. Her eldest daughter, Sydney, has attended Kickapoo for 10 summers, and her youngest daughter Fallon for 6 summers. Angie’s professional background makes her a perfect fit for her role at Kickapoo. She graduated with a B.A. in Communications from the University of Texas at Arlington, and prior to joining Kickapoo's executive staff, spent over 20 years working in the field of advertising and marketing. Angie lives in Southlake with her husband Brian, Laura's son, their daughters Sydney and Fallon, and son Kaden. While away from Kamp she enjoys volunteering at her kids' schools and watching her children participate in their favorite activities such as football, cheerleading, volleyball, and swimming. 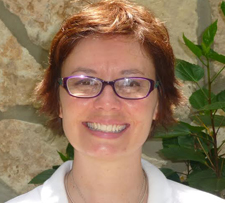 Rachel Hodges is the Term 2 Media Director. She started working at kamp in 1999 as a kounselor who did not know anyone. She heard about Kickapoo while she was working at James Avery in college. Over the years, she has worked several jobs at Kickapoo including Director of Health & Safety and an Office Assistant. She was also Laura’s dog-sitter for many years before meeting her husband Chris, Laura’s middle son. Rachel works as an Elementary School Teacher in Dallas. 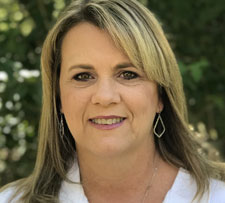 Kathy Walden is Kickapoo’s Executive Program Director. Kathy joined the Kickapoo family in 2006 when her daughter, Hannah, became a kamper. Kathy had seen firsthand the value and quality of Kickapoo Kamp through her friendships with other kamp families and her experiences with bringing school and scout groups to kamp for weekend retreats, and she wanted her daughter to get to experience Kickapoo. Kathy has many talents that are utilized in creating a quality program at Kickapoo. She enjoys watching kampers enjoy the parties and special activities that her artistic flare and organizational abilities help create. Each fall, she designs Kickapoo’s annual yearbook. Kathy graduated from the University of Texas with a BS in Education and is an avid Longhorn fan. After a 28-year teaching career at C.D. Fulkes Middle School in Round Rock ISD, she retired in 2018. Kathy lives in Georgetown with her husband and two children. She enjoys photography, graphic design projects, scrapbooking, reading, traveling and spending time with her family.